It’s the middle of winter, but mark your calendars for May 5th–the night of this year’s WJC Spring Gala. We are busy planning and will be paying tribute to Carol & Steven Fasman and Rabbi Adir Yolkut & Lauren Binder. Not only is the Gala a huge fun party, but also, an important fundraiser for so many of the Center’s fantastic programs. 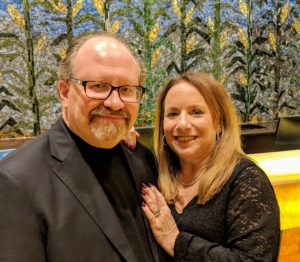 Carol and Steven come from strong Jewish homes with a commitment to giving. Steven was raised in Rockland County, his family was active in their synagogue, and he held leadership roles in USY. Originally from Baltimore, Carol and her family were active in their synagogue, Hadassah, and The Associated Jewish Charities. Carol vividly remembers sorting donor cards as her mother raised money during the Six Day War. Carol and Steven have instilled the same service ethic in their children, Nifer (27) and Matthew (23).

Steven has enjoyed a successful legal career and is currently Senior VP and General Counsel of Catalent, a multi-national pharmaceutical developer and manufacturer. He was Executive VP-Law at MacAndrews & Forbes, and an associate at Paul Weiss, running the Associates’ UJA Campaign.  Never too busy for WJC, Steven has served as a trustee, sanctuary High Holiday services coordinator, Ritual Committee co-chair, and is currently a member of the Spiritual Life Committee. Occasionally, he chants Torah and Haftarah. Steven is a long-time trustee and former President of The Jewish Board of Family & Children’s Services. Carol and Steven are members of UJA-Federation’s King David Society.

Carol is a mover and shaker, with impressive leadership credentials. Without her efforts, many WJC activities would not happen! Carol was President of WJC’s Religious School PTA, organizing the Purim Carnival with its fun-filled Bazaar for years. A three-term Trustee, Carol served on the Education and B’nai Mitzvah Committees and as Kiddush Coordinator, Co-Chair of the Annual Gala, and Chair of the Journal and Raffle Committees; currently she serves as President of Sisterhood and chair of the Sisterhood Gift Shop. Carol was Chair of UJA-Federation’s Larchmont/Mamaroneck Women’s Campaign and UJA Westchester’s Flame of Friendship. Carol served as President of the Neshama Hadassah Chapter and is on the Executive Committee of Hadassah Westchester.

Carol and Steven are most proud of their children. Nifer attended WJC’s Religious School and Hebrew High School, was a Lillie Rubin Bible Contest winner, and a trainee in the Hebrew School teacher training program. Matthew attended WJC’s Religious School and Schechter Westchester Day School. Both celebrated their B’nei Mitzvah at WJC and traveled to Israel with WJC in 2003. This year, they will happily see their family grow when Nifer marries Aaron Goldman.

The Fasmans are delighted to share their special evening with Rabbi Adir Yolkut and Lauren Binder. They are grateful to WJC for their spirit of friendship and community. They are especially appreciative of Co-Chairs Myra Glajchen and Karen Everett, Sub-Committee Chairs Janie Frieman, Cathy Dobkins, Alice Weiss, Lisa Zeitoun, and Ritchie Zeitoun, Executive Director David Goldstein and President Jeffrey Lavine.

Adir and Lauren first met on USY’s Poland/ Israel Pilgrimage trip. When they met again on a program in Israel, their friendship deepened, and ten years later, they married!

A graduate of the Ziegler School of Rabbinic Studies in Los Angeles, Adir came to WJC in 2016. He was drawn to WJC for its willingness to balance a storied past with a capacity to innovate, its warm and welcoming community, and the strong mentorship he found in Rabbi Segelman.

We asked Adir to share “A Day in the Life of an Assistant Rabbi.” Adir starts his day praying with the WJC community. Most mornings he prepares sermons and classes, meets with congregants for coffee, and plays with the EEC children. He also confers with Cantor Goldberg and Rabbi Segelman about upcoming services. In the afternoon, he enjoys working with b’nai mitzvah students on their divre torah. For balance, Adir stays physically and mentally fit, meets Lauren at the train, and spends time with her cooking and eating dinner. Evenings are filled with minyan and committee meetings.

Always a deep Jewish thinker, Adir integrates modern concepts into ancient teachings, refracting wisdom into current culture. Favorite activities include teaching the Introduction to Judaism course, the Tuesday Parshah Class, the High Holiday Family Service and sharing pretzels and candy with energetic EEC children every Friday! Adir’s Pop-Up Rabbi allows him to get to know people outside the confines of a service. Looking back, Adir has grown immensely at WJC. He appreciates the need for a rabbi to be fully present – physically, emotionally and spiritually. He has developed patience and an ability to see other people’s perspectives. He has created new opportunities for multi-generational learning which leaves him optimistic about the future of Judaism.

Lauren teaches 4 year-olds at the Jewish Community Project in Tribeca. This year, she began studying for a dual Master’s Degree in Early Childhood/Special Education at Bank Street College. Her favorite WJC activities are the soulful music and social justice activities. WJC will always occupy a special corner of Lauren’s heart because it was here that she and Adir became engaged and married, celebrating their incredibly joyful Sheva Bracha. Lauren treasures the relationships, the power of connection, and the compassionate, loving community. Of course, she stretched her vocal and acting skills through her one-and-only Purimspiel appearance, of which Rabbi Segelman’s version of “You’ll Be Back” is forever stuck in her head.

Looking ahead, Adir will explore other avenues of the rabbinate in which he can maximize teaching opportunities. Lauren will continue studying and teaching. Together, this remarkable couple plans to experience new parts of the world and see where life leads them. We will miss them and wish them a bright future!

Back to the Gala page

Enter your email address below to be put on our email list and receive periodic email updates from Westchester Jewish Center.

Westchester Jewish Center welcomes your contribution to any our listed funds.