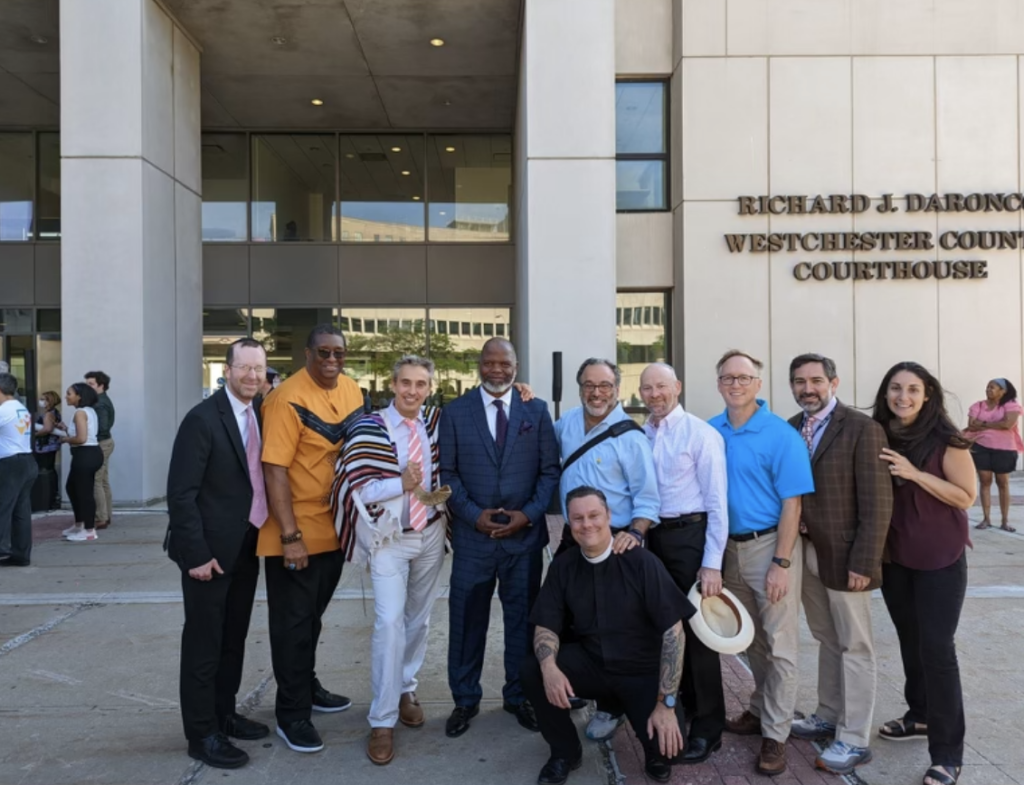 Yesterday I had the opportunity to attend the “Gather Against Hate” assembly at the Westchester County Courthouse—a gathering inspired by the recent shooting in Buffalo, Uvalde and around the country. (Next Shabbat following our member, Rabbi Menachem Creditor will be leading a discussion, Post-Kiddish Discussion: Jewish Sources and Gun Violence – see details here.)  I was moved by the speakers, which included ministers, rabbis, imams and elected officials, such as New York State Attorney General Letitia James and Westchester County Executive George Latimer. I was also proud to stand with ten or eleven of my new friends and colleagues whom I met on the Westchester Jewish Council Mission to Israel sponsored by UJA Federation of New York. It was encouraging to see that this group showed up in force (some of whom are pictured here) as it highlighted our commitment to our broader community and each other. Our time together in Israel continues to bear sweet fruit.

I was particularly moved by two speeches: the first by Mamaroneck’s own Jirandy Martinez, executive director of the CRC, which serves immigrants to Westchester and with whom we have a very close relationship organizationally and personally. The second speech that was especially impactful was given by Judy Troilo, executive director of LOFT LGBTQ+ Community Center in White Plains.

Jirandy spoke of the extreme sense of vulnerability and fear in her community in a personal and honest way. She particularly pointed out the trepidation of parents and children who are dealing with all of the fright other families have after a school shooting, as well as the fear that they cannot turn to authorities for help and support. It was an important reminder that those living in vulnerable communities experience distinct after-effects of the frightening violence that is too common in our society. I am looking forward to revitalizing our partnership between our SOJAC and the CRC in the year ahead.

What struck me about Judy Troilo’s speech was her opening and closing, “Happy Pride Month.” “How wonderful” I thought to myself, “that ‘Pride’ has become less a term of protest and more a term of celebration.” And it is true, things have changed for the LGBTQ+ community at a surprising rate and mostly for the better. However, as Judy Troilo pointed out (and as we read in the news), bias against LGBTQ+ individuals in hiring practices, verbal and physical assaults and higher rates of mental illness, subtance abuse and suicide (especially for trans Black people) persist. It is a reminder that as far as we have come, there is still more to do.

Prior to the pandemic, WJC had several educational programs and efforts to address inclusion – led by a task force under the leadership of Heather Gold and Louise Cohen, who did excellent work and to whom we remain grateful. Throughout the pandemic, inclusion and connecting with people took on a different kind of meaning, as we worked to connect with anyone and everyone under difficult circumstances. As we turn to the year ahead, we are refocusing on inclusion of all kinds, including the LGBTQ+ community, as well as people with disabilities, multifaith families, remote members and more. To take the project forward our new president, Larry Thaler (mazal tov to him and us on his installation) has appointed Amy Levine-Kennedy to a new position, Officer for Membership and Inclusion. I applaud the creation of the officer position and look forward to working with Amy to move this conversation forward at WJC.

And, I don’t want to miss the opportunity to wish the congregation “Happy Pride Month.” In particular, the clergy and I want you to know that we are here to be a resource to our LGBTQ+ members and the wider LGBTQ+ community. In particular, we understand that it can be complicated for teens and their parents to navigate issues of sexuality and gender (heck, it’s complicated for everyone), and especially within the Jewish community. After all, it is only 16 years since the Committee on Jewish Law and Standards (CJLS) passed a responsum enabling gay marriage and gay rabbis. Publicly grappling with and protesting passages in the Torah that have been used as reasons to persecute and victimize has only begun as a widespread practice even more recently.

That’s why it is so important not only to update our practices and spaces to be more inclusive; it is also important to reiterate the message – we want everyone who comes into our building to be able to do so as their full selves, not only with pride, but also with integrity. It is why we have always invited people to take an aliyah from the Torah by whatever name they prefer and why we appreciate the new CJLS teshuva  that affirms standards for calling up trans and non-binary individuals to the Torah. We support the effort as we support all of you. If you would like to talk about the convergence of your Jewish identity with any other identities, whether that be about gender and sexuality, ethnicity, nationality, race or whatever makes you uniquely you, please reach out and let us know so that we can share and celebrate the beautiful complexity together. We are always up to meet and hopefully help talk things through. While we celebrate pride, we also want to celebrate all of our members and their whole selves!

And we are looking forward to celebrating with Eden Polson and her parents, David Polson and Rabbi Jennifer Tobenstein as Eden is called to the Torah as a bat mitzvah on Saturday morning. I hope we see you in shul too, to celebrate Shabbat with us—see times below—and celebrate our diversity!

Speaking of which, please note that in celebration of Juneteenth (observed), the office will be closed on Monday, June 20th and minyan that morning will be at 8:30am.

See you in shul,