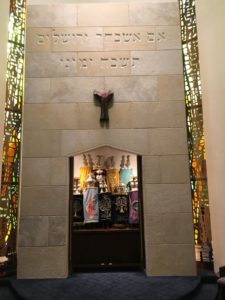 Holocaust Memorial Scroll, bottom second from left, in the Ark at WJC. 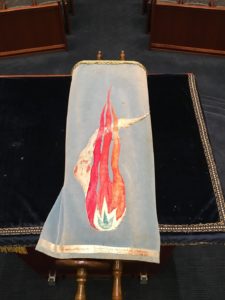 Westchester Jewish Center is grateful to have a Pre-War Czechoslovakian Torah scroll that was rescued from the Holocaust.   This was part of a collection salvaged from a Czech synagogue during WWII.  The Memorial Scrolls Trust in London, UK has been responsible for the distribution of these scrolls for permanent loan to synagogues and other institutions throughout the world with the goal of remembering those communities wiped out during the Nazi atrocities. Our scroll #909 is one of 216 “Orphan scrolls” that cannot be traced to a specific community in Bohemia and Moravia.

Our scroll was one of the hundreds found stored in a synagogue in the Michle district of Prague and were brought to London in 1964. In 1986, at the initiative of Gerhard Spies (of blessed memory), Scroll #909 was brought to Mamaroneck and took its place in WJC’s aron kodesh (holy ark). The scroll was refurbished and restored to kosher status by the sofer (Torah scribe) Rabbi Solomon Koenig.

We are proud to commemorate the legacy of Jewish communities destroyed in the Holocaust by using this Torah scroll as a part of our vibrant Jewish life at WJC.

For more information on the Memorial Scrolls Trust, visit their website at www.memorialscrollstrust.org

Click here for an article describing the scroll’s arrival in 1986.