‘“Ezra is doing us a favor because it keeps our minds working.” —Shavee Altman 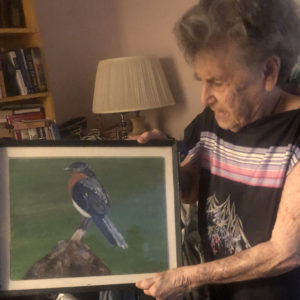 I met Shavee when I joined other Project Ezra volunteers on the Lower East Side delivering boxes of Passover foods, some filled with food collected at WJC. Shavee welcomed us into her apartment, and when I admired one of the paintings on the wall, she told us all about her painting, jewelry-making, and other activities. I left there knowing she was a special woman.

Born in 1929 at the Jewish Lying In Hospital on East Broadway, she is a lifelong resident of the Lower East Side, widow of Harry Altman (her “gorgeous” husband), mother of four children, grandmother of eleven, great-grandmother of twelve, a painter, jewelry-maker, avid reader, film lover, lover of Israel and Yiddishkeit, and social commentator.

As a child, she and her mother took part in what the Grand Street Settlement had to offer. She later worked there as Assistant to the Director for the camp program, which her children attended. She strongly believes in the value of social work and social work agencies as advocates for those who cannot advocate for themselves, and as shapers of lives.

Shavee is at Project Ezra’s new Grand Street quarters three times a week for classes, often led by professionals in the field, such as literature taught by an NYU professor, jewelry design, where she always comes out with a piece to match her outfit, current events, centering on Jewish issues and Israel, and films, focusing on Jews, Israel, and Yiddishkeit. She also attends most of the trips with Ezra, and as she says, “God willing, I will be at the Ezra luncheon at WJC later this year.”