Join us February 5-7, 2021
as we welcome Rabbi Menachem Creditor

“Healing Ourselves, Our Community, Our World”

The Scholar-in-Residence Program is solely supported by donations. Your contribution is vital to Adult Education at WJC. Click here to register, learn more about the donation levels, and to contribute. Thank you for your generous support in advance.

For registration and more information on weekend events and sponsorship opportunities, please click hereor contact the synagogue office at 914-698-2960, Rosie@wjcenter.org. Please be prepared to indicate which events you’d like to attend. 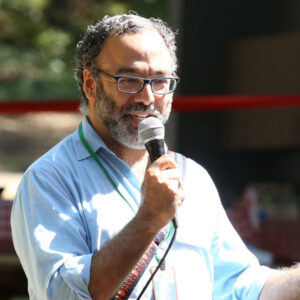 When shots rang out at the Sandy Hook Elementary School in Connecticut on that awful day in December 2012, Rabbi Menachem Creditor was 3,000 miles away in Berkeley, California, serving as the spiritual leader of Congregation Netivot Shalom.

Despite the vast distance, news of the massacre quickly lit an emotional, spiritual and intellectual fire within Rabbi Creditor.

Already a liturgist for the Rabbinical Assembly of America, he wrote a prayer in the aftermath of the Sandy Hook shooting that was recited across the nation in countless synagogues, as well as churches and other houses of worship. He also led a delegation of Jewish leaders to the Obama White House, a journey that led him to found the organization Rabbis Against Gun Violence and to edit an anthology that grew out of that work. Its title: “None Shall Make Them Afraid,” which draws on the Prophet Micah’s hope for a world where “every person will sit under their own vine and fig tree, and none shall make them afraid.”

Now the Pearl and Ira Meyer Scholar in Residence at UJA-Federation New York—and a speaker and writer whose videos and essays have been viewed more than a million times—Rabbi Creditor will bring his teachings on healing, community, and spiritual resilience to Westchester Jewish Center, from February 5 to 7, 2021, as our next Scholar-in-Residence.

Those whose membership at WJC stretches back two decades may remember Menachem Creditor as a religious school teacher at our Center in the late 90s and early 00s, even before he had earned his degree from Columbia University and the Jewish Theology Seminary under the List College program.

Rabbi Jeffrey Arnowitz has an earlier memory: as teenagers in the early 1990s, he and Rabbi Creditor were bunkmates at Camp Ramah in the Berkshires. Rabbi Creditor recalled a young Rabbi Arnowitz befriending him and introducing him to three albums: David Bowie’s “Changes,” Queen’s “Greatest Hits,” and the soundtrack to “Jesus Christ Superstar.”

Camp Ramah (of all places) would later put on its own production of “Jesus Christ Superstar,” with Rabbi Creditor in the role of Jesus (adapted as a false messiah with the name Shabtai Tzvi.)

Rabbi Creditor never lost his musical chops, and went on to create six albums of original music, including the global Jewish anthem, “Olam Chesed Yibaneh.” He and his wife, the singer and songwriter Neshama Carlebach, share five children.

Said Rabbi Arnowitz: “Rabbi Creditor’s unique balance of fealty to classical Jewish values and devotion to modern-day ethical causes makes him a valuable and unique voice in our community.”