A Conversation with David Fair: Reflecting on Race

SOJAC presents A Conversation with David Fair, Hebrew Union College-Jewish Institute of Religion’s first Black Cantorial student: “Reflecting on Race from the Perspective of the Synagogue and the Jewish Community.”

NEW DATE! At this very important time in our country, we invite you to join us on Sunday, August 16 at 10:00am for a conversation with Rabbi Jeffrey Arnowitz and Cantor David Fair on race and the Jewish community. David Fair is HUC’s first Black cantorial student, who will share his perspective on current events as a Jew of Color and Jewish and Anti-Racism educator. Both Rabbi Arnowitz and Cantor Fair bring a sense of openness and humor to what will no doubt be an engaging conversation. 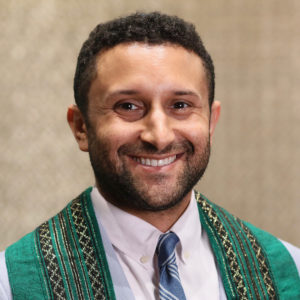 David Fair is a rising 5th-year Cantorial student at the Debbie Friedman School of Sacred Music of Hebrew Union College – Jewish Institute of Religion. He has a BA in Theater from the University of Maryland College Park, a Professional Studies Diploma and Artist Diploma from the Cleveland Institute of Music, and a Masters in Sacred Music from HUC-JIR. He is a recent graduate of the UJA Graduate Fellowship of the UFA Federation of New York. David served as the Cantorial Intern with Kehillat Lev in Tel Aviv, Temple Beth Israel in York, PA, and most recently at Congregation Beit Simchat Torah (CBST) in New York City. Before entering Cantorial school, was a professional preschool teacher, teaching at the JCC of Greater Pittsburgh and Chicago Jewish Dayschool.

David takes his role as an Anti-Racism educator very seriously, having been raised by his non-Jewish Black father and a white Jewish mother. Last year, he was proud to be a featured speaker at HUC-JIR’s annual Yom Iyun, where the topic was “Experiences of Jews of Color—Creating the World We Wish to See.” He is currently writing his Masters Thesis, the topic of which being “Musical Experiences of Black Jewish Americans.” This September, David will begin as the Cantorial Intern at Washington Hebrew Congregation in Washington, DC.