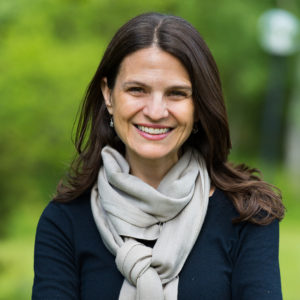 A TED Talk by Rabbi Sharon Brous of Los Angeles, titled “Reclaiming Religion,” has been viewed more than 1.3 million times online, but the WJC community will have an opportunity to engage with her live and in person during our upcoming Scholar-in-Residence Weekend, from Feb. 7 to 9.

Rabbi Brous, who grew up in Short Hills, N.J., and graduated from Columbia University before being ordained by the Jewish Theological Seminary, is the senior and founding rabbi of IKAR. Launched in 2004, IKAR is a Los Angeles congregation rooted in the goal of “reinvigorating Jewish practice and inspiring people of faith to reclaim a moral and prophetic voice.” It is among the fastest growing congregations in the nation, as it seeks to swim against a tide of “disaffection and declining affiliation.”

In a recent phone interview, Rabbi Brous said she would thread similar themes throughout her discussion and engagement with the WJC community in February.

Following a Friday night service and community dinner on Feb. 7, she will lay out an overarching framing for the weekend: “What Does it Take to Reclaim a Soulful, Purposeful, Inclusive Vision of Religious Life?” Rabbi Brous said she had asked herself similar questions as a younger person, including during her undergraduate years at Columbia and a junior year abroad in Israel.

She said she also intends to broaden her opening talk beyond Judaism, to encompass other religions. She is particularly concerned about religious traditions becoming “regressive, hate-filled, even violent” in the hands of some practitioners.

She has titled her Shabbat Morning sermon “The Stories We Tell: Who Are We and Who Do We Yearn to Be?” which she said would touch on the story of Judaism’s emergence from the wilderness to the Promised Land, as well as the stories that each of our families pass down through the generations.

“I want to start by asking us to think about the core narratives of our own families,” she said. “How do they help us to understand who we are and how we might live in the world today?”

After a Kiddush lunch on Saturday, she will tackle the theme “Now or Ever: Pursuing Justice in an Unjust World,” in which she’ll range from the Mishnah to the writings of Dr. Martin Luther King Jr., as she explores the tension between a “call to act with a sense of urgency” and “a desire to work toward longer-term, more strategic solutions.”

During a dessert reception on Saturday evening, Rabbi Brous will facilitate what she describes as “a real conversation about the reemergence of anti-Semitism in America today,” which she has titled “Are Jews Eternal Outsiders Looking In?” Among the thinkers she intends to reference are Abraham Joshua Heschel, and his ideas about ways to find strength in moments of great vulnerability.

The weekend will close on Sunday morning over brunch with a moderated conversation between Rabbi Brous and Rabbi Arnowitz. The discussion will begin by examining the theme of “Parenting with Moral Clarity and Courage” – including questions of “how we bring religious, moral and ethical teachings to bear on our parenting” and “how we infuse our children with Jewish values.”

For more information, including registration, go to www.wjcenter.org/sir.