Blogging from Israel ~ 2022: Ceasaria and Sarona

After another incredible breakfast, on Thursday morning we left the Golan. (And before I share all about our activities on Thursday, I really do need to take a moment to praise the breakfasts we’ve had each morning. Israeli hotels have these incredible breakfast spreads with so many options – breads, baked cheesy/vegetable/egg focaccia/calzone type things, more cheeses than I can name, fruit, veggies, pancakes, eggs to order, blintzes, halva bars, yogurt, cereal, and cheesecake. What you didn’t know cheesecake was a breakfast food?!?!? Neither did I, but I like it!)

We traveled from the Golan to Caesarea. This site was another example of Herod’s building prowess. He really had some innovative ideas and techniques. As the Roman-appointed leader of Judea, he wanted to build a monument to Caesar and decided to build a fantastic port city, with a hippodrome, amphitheater, palace, temple and more. To extend the land and make the port, they filled wooden crates with volcanic ash and then placed them in the water (when volcanic ash gets wet, it forms a very strong stone, and sunk the crates. So clever. Caesarea is another good example of a place that has seen its share of rulers, building over and next to and around the civilization before it. So, Herod built it for Caesar, then the Romans took it over directly, then the Byzantines came in and conquered it, replacing the Temple to Caesar with an octagonal Church. Then with the birth of Islam, the Arabs conquered the land and built a mosque. Then the Crusaders came to the land of Israel, conquered Caesarea, knocked down the mosque, built a cathedral and a classic crusader fort. They were ultimately conquered by the Mamluks who destroyed much of the building and left it desolate. 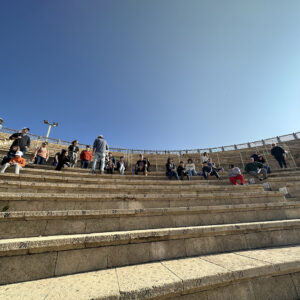 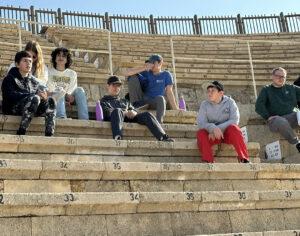 It wasn’t until the 20th century that Casarea got attention again, and now the suburbs around the ancient area are the “Beverly Hills” of Israel! I know that Israel isn’t the only place in the world to see turnover, but it really is intriguing to see these layers of history play out and to be able to see physical evidence from so many time periods at once.

From Caseara we headed to the really modern – Sarona Market in Tel Aviv. It’s a hot spot in Tel Aviv with a foodie market, kind of like Chelsea Market in NYC. We had a delicious lunch, some of us got to play on a playground for a few minutes and then we headed to the original area of Tel Aviv to hear about the families who founded the city and see the spot where Israel declared independence. So many of our group were remarking on the difference between Tel Aviv and Jerusalem. While both are major cities, the areas we visited in Jerusalem felt more like stepping into a different time and place. Tel Aviv has the feeling of a modern European city. But they both have traffic!