This morning we woke up at our new hotel in beautiful Tel Aviv.  Having breakfast overlooking the Mediterranean Sea is quite something, as is the breakfast selection.  With a full stomach and our hiking shoes on, we got on the bus for an hour drive to “Dig for a Day.”  All of us played the role of archeologist and got to explore ancient caves in the Beit Guvrin National Park, the ancestral home of King Herod, and a UNESCO World Heritage Site.  We shimmied our way down a cave that dated back to the Hellenistic (Greek) period, some 2,200 years ago. The caves served as basements to the homes above and were where the dwellers manufactured and stored olive oil.  As the climate aboveland would change and get unbearably hot in the summer, the climate in the cave would remain constant and be perfect for oil.  Amazingly, and I am not sure if our guide was pulling our leg or not, she called the cave The Westchester Cave, after a group from Solomon Shechter (Leffell School) “opened” it, meaning they were the first to dig there.  One part room of the cave is called West and another room is called Chester. 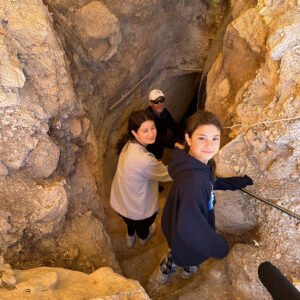 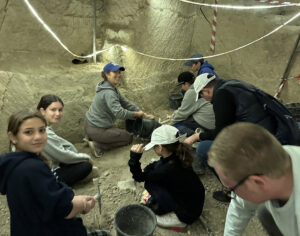 In “Westchester,” we literally got on our hands and knees and dug into the earth.  Sam Sitkowsi and my daughter Perri uncovered part of the cave floor while Davin Toeman found a jar handle that was remarkably intact.  After digging for an hour and uncovering fragments of pottery, bones from someone’s dinner 2200 years ago and some coal, we deployed the bucket brigade method and brought up all our findings (and tons of rock and dirt) out of the cave.  We then sifted through all the sand and made sure we captured any and all smaller elements that might be of interest to the archeology team.

Although our labor made us all quite hungry, we still had more exploring to do.  Part of the group went on what my daughter described as “an underground adventure course.”  She said the slipping and sliding was “cool,” and that says a lot from a 12-year old.  The other group went through a series of labyrinths where olive oil was pressed.  It was amazing to see how these caves were made by hand, carved out from the stone, in order to support the manufacturing of oil.