We’ve been as busy as bees since we last wrote – we even got to see some bees at Biobee, but more on that later. First a guest entry from WJC ECC Director Ann Pardes who is on the trip with us:

I turned 60 yesterday. Happy Birthday to me! This trip to Israel was a birthday gift I gave to myself. This is my second trip to the Holy Land. I missed going to Masada my first time here. So, when I saw the itinerary that we were going to Masada on my birthday, I was excited to say the least. Although the rainy weather threatened my second chance at hiking it, we made the journey. The rain stopped long enough for me to climb Masada with my new friend Dale Klein. It was the hardest hike of my life! We stopped along the way to view the majesty surrounding us. Upon reaching the top, I had a very emotional moment. My tears and chills were the holiness I felt in that moment. To use my newly acquired Hebrew word it was Sababa!

Happy birthday to Ann. We are so glad we got to spend it with you! 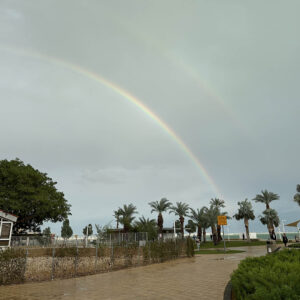 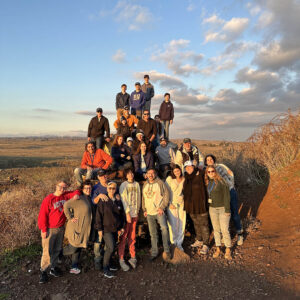 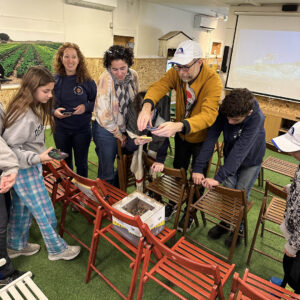 The last couple of days we’ve had water on our minds. On Shemini Atzeret when we started praying “Mashiv Haruach U’Morid HaGashem,” the prayer for rain in our daily amidah, we didn’t think we’d be here to witness just how effective our prayers could be! But wow was our time in Jerusalem Sunday and Monday rainy. It was so rainy we even got rained on in the desert, a very rare privilege indeed! Now, while rain in Israel is always a blessing, it did put a damper on, or should I just say dampened, our fun. But boy were we rewarded for our fortitude in the face of the storms.

I know you’ve had some weather back home and I pray everyone is fairing okay – it’s not freezing here, but these were intense storms with wind, thunder and lightening, and it was cold enough to require all the “just in case clothing” we brought along…layers, coats, raincoats, and umbrellas. Still, we schlepped out to Masada and the Dead Sea on Monday and I saw at least two things I’d never seen before. 1) An Israeli tour bus driver so amazed at what he was seeing that he pulled to the side of the road and took out his phone to take pictures – even after 20 such tours, never once before have I seen a bus driver so impressed with what was around him and 2) the phenomenon that he was photographing – a flash flood causing a giant waterfall to pour over the edge of the Judean desert and run down to the Dead Sea. Then at the Dead Sea, we were rewarded with a triple rainbow in the sun after the storm! Check out the pictures of the waterfall and the rainbow – both were breathtaking!

It’s a little bit like the story of this country – it’s complicated and unpredictable, but you adapt and scrap, try to be good and do the best you can. When you make mistakes or challenges seem unsolvable, keep adapting and aspiring to be a force for good and doing the best you can.

Speaking of scrapping I promised to mention Biobee. On our way North we stopped at Kibbutz Sde Eliyahu, a Pre-1948 Kibbutz that still functions under the old socialist model today (with plenty of adaptations). Only 50ish Kibbutzim are still socialized – the other 250 or so privatized years ago. Anyway, they run an amazing organic agriculture business. They breed predatory bugs that kill specific pests (aphids and mites) that destroy crops. By introducing a balance of predators, there is much less call for chemical pesticides. Different regions require different bugs, so they run facilities all over the world. They all export “bee boxes” pictured here, to help with the bee shortage and make sure crops get fertilized, a necessary step to producing fruit. What a great example of adapting to a new world and doing good at the same time!

Grit, determination and trying to put some good into the world. It’s not grand, but it’s a worthy philosophy for us all. Sometimes you miss swimming in the Dead Sea or get poured on when attempting to light Hanukkah candles, other times you get rainbows. Let’s all pray for rainbows (just as we said the prayer for rainbows on the bus by the Dead Sea).