Welcome to our WJC Israel Trip 2022 first blog entry! I have thought a lot about what I’d like this blog to be about, but the project didn’t really crystalize until we were on the bus from Tel Aviv to Jerusalem and one of our trip participants, Jeremy Toeman, was playing around with an Artificially Intelligent Author Program. He entered the following: “Write me a blog post of a rabbi’s reflections on returning to Israel on a trip with a family group of friends and families from his new synagogue.” I’ll be darned if the AI didn’t nail at least the first three or four paragraphs, including our trip and itinerary, before getting a little off topic. Yikes on behalf of all of us who write for a living! 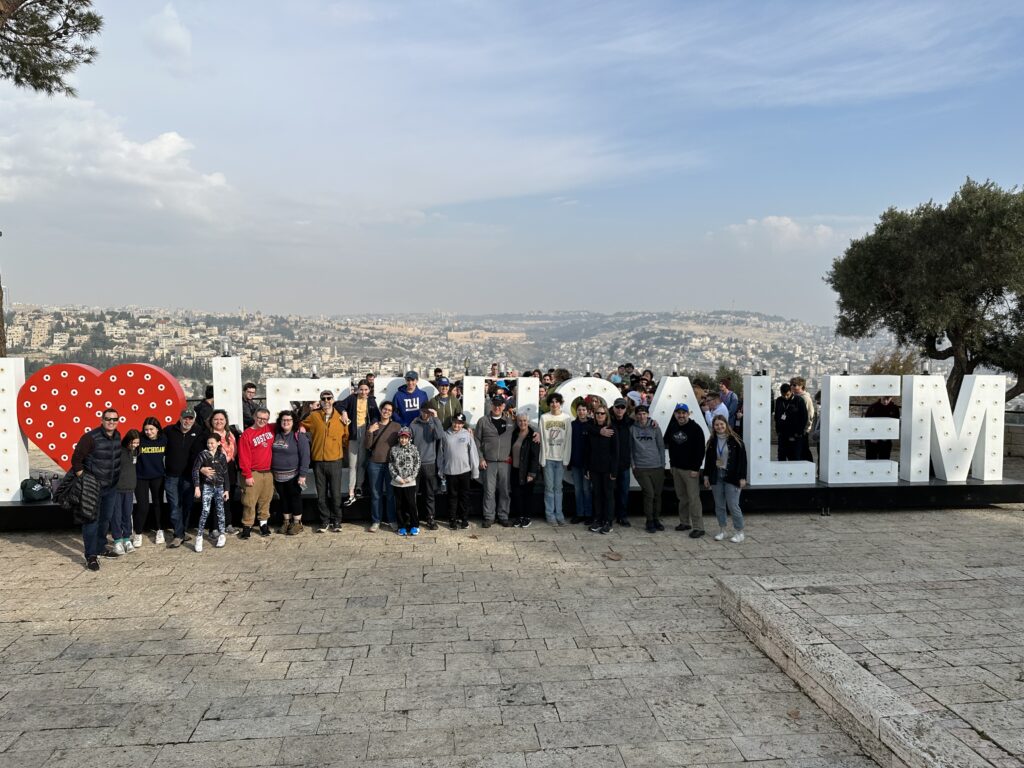 While it might be nice to reflect on the deeper communal meaning of traveling to Israel together (which the AI did), the Israeli coastline appearing on the horizon as we flew across the Mediterranean Sea (which the AI said) and the excitement of the trip from the airport up to Jerusalem (which the AI noted, though in our version we were much more tired than the AI described from our 15 hours of travel), we will try to do something a little more original here. I and my fellow traveling companions will try to share our thoughts and feelings about unique and meaningful experiences that are special to us for some particular, and maybe unusual, reason. And in doing so I hope we will be able to highlight the side of Israel too often ignored in the Israel conversation back home – the side of Israel that is just people, from lots of different backgrounds – different faiths, ethnicities, national backgrounds and histories, trying to live their lives in the best way they can.

So, I will get things started by mentioning how meaningful our trip to the mall for dinner was tonight. It’s true that there is always a special connection between a kid from Jersey and a mall, but this one got to me for reasons totally aside from my proud NJ upbringing. December 22nd is definitely mall time, so to see this outdoor mall known as Mamilla packed with people was no surprise. What definitely did feel different was the lack of Christmas Carols playing or candy canes and green and red decor hanging on everything. There was no Santa to take a picture with (plenty of big beards in fancy suits, but there was a distinct lack of red clothing.)

There were however a couple of 12 foot tall hannukiyot, big, fancy brass ones, burning oil to shine 5 flames for the 5th night of Hanukkah and one for the shamash. And the only music playing was from two grade school kids playing Hanukkah songs on their trumpet and clarinet respectively, backing themselves up with a GIANT karaoke machine. You could barely hear the kids, but their rhythm machine could be heard throughout the plaza they occupied. Being in a mall with Hanukkah decor and music just feels different – like we belong differently.

I share this story not to say that it is great to be in a country where everyone is Jewish – they’re not, and we too often make that mistake. However, there is something about being in a country whose character is Jewish. A Jewish country not because only Jews live here (God forbid), or only Jews have the ability to run things or make change here (also untrue). But Jewish because of its character, in the same way we could make arguments that the US is a Christian country by character, despite its vast diversity of faiths and peoples. We’ll feel it again as people are mostly off work for Friday and Saturday – the Israeli Weekend built around a Jewish week and especially during this Jewish holiday – and as the whistle sounds this evening all around Jerusalem to note that Shabbat is beginning.

It is special to be in a Jewish country by character, the only one in the world in the only place where one has ever existed. It was this Jewish character the Maccabees sought to maintain in the face of the assimilation of Greek culture in their time. Today the seven families traveling in Israel from WJC, well, we’re Maccabees too. Happy Hanukkah and Shabbat Shalom from all of us!