I have always been touched by the confluence of the anniversary of Kristallnacht and the commemoration of Veteran’s Day. Kristallnacht represents the very lowest humanity can sink. The massive pogrom of 1938 with its vandalism aimed at Jewish businesses and institutions, its horrifying mass murders across Germany, represents to most the beginning of the Shoah. According to Yad V’Shem when the pogrom was over, 92 people had been killed in two days, 30,000 had been sent to concentration camps, and 1,400 synagogues were destroyed. 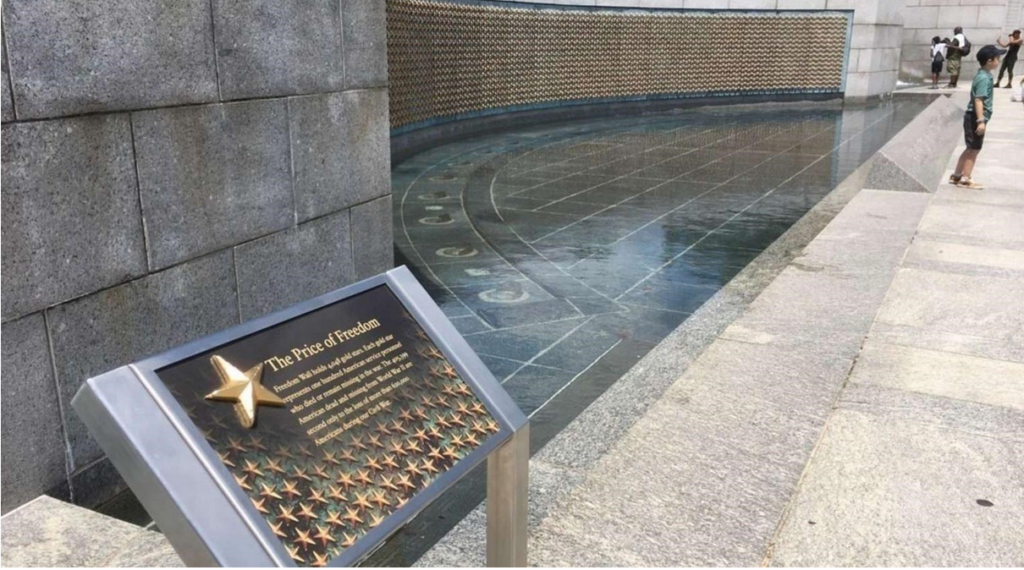 There is something poignant in the fact that on the very day we remember the horrifying pogrom, we honor those veterans who served in the US military. I became particularly sensitive to the observance of Veteran’s Day while serving a congregation in Norfolk, VA. Norfolk is a real military town and I learned a lot there about the men and women who dedicate their lives to US military service. However, it was at the World War II Memorial in Washington DC that the meaning of the junction of these two days really hit home.

The whole massive memorial is truly magnificent in its symbolism and meaning. Right at the center are 4,048 gold stars. Each star represents approximately 100 service members who lost their lives fighting the cause of the war, some 405,399 fallen American service personnel. Isn’t it remarkable that just as humanity was revealing its darkest evil hundreds of thousands of Americans, most who had never been overseas, some who had never met a Jew, headed for Europe to fight that evil? When thinking about Kristallnacht and the Shoah it is difficult to find any glimmer of light. Yet, I find that light in the dedicated service personnel of the US military.

When I was a newly minted rabbi in Cherry Hill, NJ, I was also privileged to find that light in the personage of a Kristallnacht survivor, Fred Behrand. During my first few years as a rabbi there, Fred moved from Washington Heights to Cherry Hill to be close to family. It was just another stop on his remarkable life journey, which we will have the privilege of viewing and hearing about this Sunday at 10am as the Holocaust Learning Center presents “Rebuilt from Broken Glass.” The film is the result of the interest of Larry Hanover, a member of the congregation and journalist who was so moved by Fred’s story that he decided it had to be told. Thus was born the book and film by the same name. I hope you will join me at  this wonderful event as we commemorate that horrible night in 1938. And if you know a veteran, maybe give them a big hug today!

The weekly Torah Talk video also deals with the theme of Antisemitism and how we can best respond, based on the current Torah parshiyot we are reading about the lives of Abraham and Sarah. Click on the link to watch the video.

Another place to find light on these dark anniversaries is in the ongoing, thriving Jewish people. Join us for Shabbat services, times listed below, to be part of that thriving, especially Saturday morning as we celebrate the bat mitzvah of Lia Seelenfreund with her parents Risa and David. Then Sunday night at 7:00pm you can join us for a moment of spiritual replenishment and healing as we will hold our monthly Renewal Service.

See you in shul,