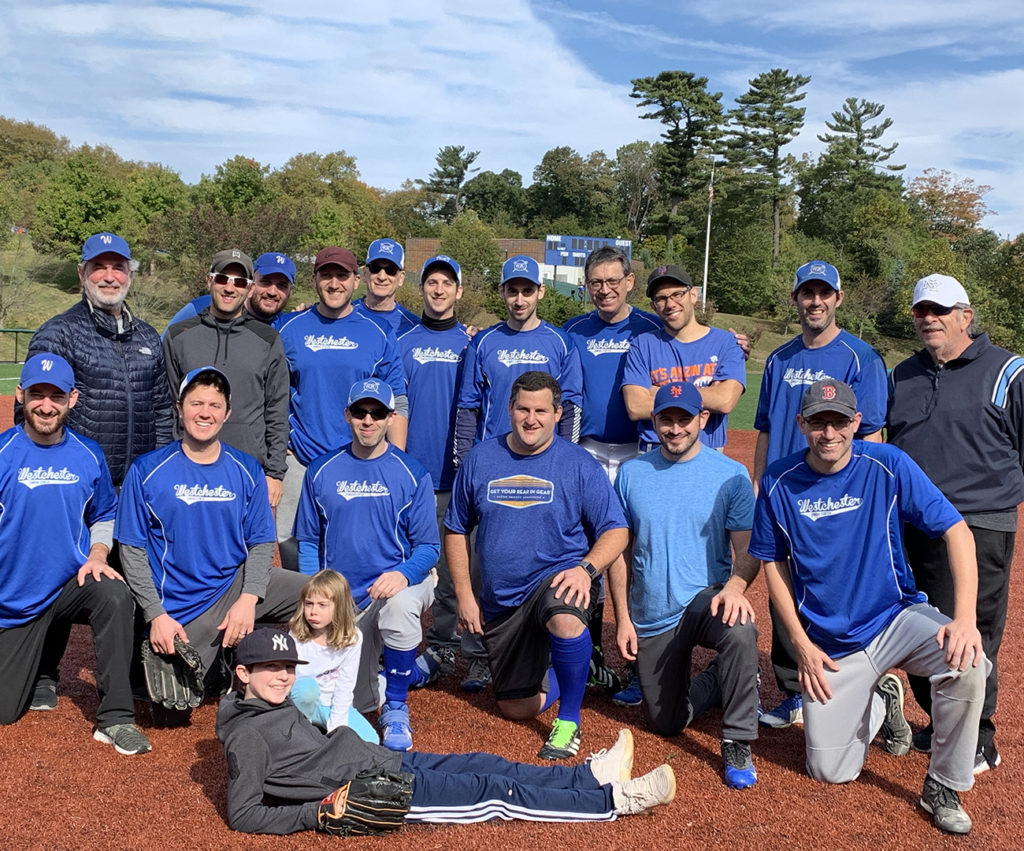 A doubleheader vs. perennial nemesis B’nai B’rith had been scheduled for October 13—with undefeated WJC needing just one victory to eliminate our opponent in the double-elimination playoff tournament.  The first game got underway after a ceremonial “first pitch” was thrown by the Team’s outstanding starting shortstop/outfielder from over 30 years ago—Richie Krasner.

B’nai struck early and often in the first game, using a patient approach and timely hitting en route to a dominating 8-0 win, leaving WJC with its “back to the wall”.

Game 2 started differently, with WJC jumping out to a 3-0 lead, and then holding that lead until the fifth inning, when B’nai erupted for 5 runs.  B’nai held the lead into the 7th behind strong pitching and solid defense, including cutting down the speedy Jordie Zelin on a close play at the plate.  But WJC was relentless, still scoring a run from second with a two-out single by Dan Kaplan, cutting the lead to 5-4.

At the top of the 9th inning, B’nai was still clinging to a one-run lead, just two outs away from the title, when Steve Kaplan hit a sharp line drive over the right fielder, tying the game with a home run.  In the bottom of the ninth, B’nai had runners on first and second, and a chance for a walk-off win.  A hard single left the game in the balance, but Aryeh Battalion made a perfect throw home to Eric Brown, who applied the tag and sent the game into extra innings.

In the top of the 10th inning, Jordie led off with a single, moved to second on Isaac Hattem’s ground out, and advanced to third on another out.  With B’nai just one out away from escaping unscathed, Dan hit a line drive that went past the diving center fielder for a two-run homer.  Finally, in the bottom of the 10th, with two on and two out, B’nai hit a lazy fly ball to right field where it was gobbled up, ending the 4-hour affair, and earning another trophy for WJC.

Congrats to B’nai B’rith on a great season, and to WJC for defending the title!  As always, we very much appreciate all the support from the WJC Clergy and Membership—and the many “fans” at our games.  The Team thanks you!  See you in the Spring!