“Whoever listens to a witness, becomes a witness”
—Elie Wiesel

Kristallnacht, the Night of Broken Glass, refers to the state-sanctioned violence against Jews that took place on November 9-10, 1938. Throughout Austria and Germany, hundreds of synagogues were torched, Jewish-owned businesses and homes were destroyed, and thousands arrested. Each year we commemorate this date as both a memorial and a warning. The WJC Holocaust Learning Center is honored to share the story of our member Hanne Holsten. Hanne was Director of the WJC Nursery School from 1973 to 2006. 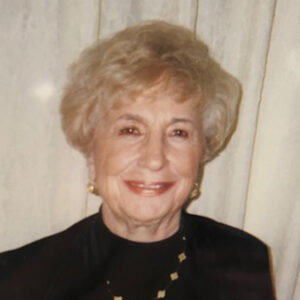 The youngest of three children, Hanne Holsten, originally named Hannelore, was born in Nuremberg, Germany to Elisabeth and Adolph Brenner.  Parents worked side by side in their jewelry business and created a comfortable and cultured home.  But to be Jewish in 1938 was dangerous. Adolph was arrested and sent to a Concentration Camp. Miraculously, he escaped to Holland where he found refuge with Elisabeth’s sister, Eva.

In the aftermath of Kristallnacht, mother and children were discovered by the Gestapo. Elisabeth averted arrest by claiming that they were Polish. *She persuaded officials to let her return to their demolished jewelry store to retrieve some inventory.

The family devised a plan to save the Brenners. Elisabeth stitched diamonds and other gems inside Hanne’s doll and within the suitcase lining. Hanne, and her older brother Siegfried, took a train bound for Holland. Knowing the children wouldn’t disembark because they didn’t have papers, Eva came aboard briefly with another doll and another suitcase, switching them with the ones with the hidden jewels. Following the sale of these valuables, the money was used to hire smugglers to save Elisabeth and her children.

They finally escaped Germany hidden in the fake wall of a furniture wagon and crossed the border into the Netherlands in the fake bottom of a hay wagon. Eventually, they were able to freely walk into Belgium, where Adolph had paid boat passage for them so the family could finally be reunited in England after two years of being hidden and hunted, narrowly cheating death. The Brenner family sought safety in Cardiff, Wales, where Siegfried celebrated his Bar Mitzvah.

When Hanne was barely 10 years old, a Brooklyn relative sent the family US visas. The five Brenners settled in Washington Heights, where Adolph and Elisabeth opened a jewelry store, once again.

Hanne attended NYC schools and eventually pursued a career in education. She married Bernt Holsten, a Viennese refugee, and raised three children. They continued the family business, first in the Bronx and then in Scarsdale, where Holsten Jewelers still thrives today.

Hanne’s mother, Elisabeth, never gave up. In some sense, she gave birth to her children twice, once biologically, and then again by rescuing them from the grasp of extermination. Although Hanne herself was robbed of her own childhood, she devoted her life to instilling young children with the means to celebrate their Jewish heritage and their inalienable rights to safety and happy childhood. 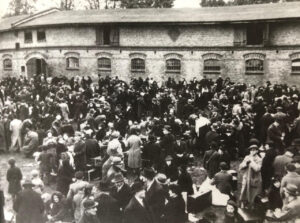 Zbasyn, the border rail station where 8000 expellees were detained, hungry, and anxious, waiting for Polish entry permits. Only a few days later, Hanne and her family would be headed towards Poland as well, but somehow were sent back to Germany.

Hanne’s mother, Elisabeth, had indeed been born in Poland.  Elisabeth and her sisters became orphaned after a pogrom in which a brother and their mother were murdered. The father had previously abandoned the family. So the four sisters were sent to Nuremberg in Germany to live with an Aunt.

Poland also played a role in that Elisabeth sought safety for her three children by taking the oldest child, Elsie, to Poland, Siegfried to Czechoslovakia, and then changed her mind and went back to retrieve them, keeping the family together, but still greatly endangered.

When Elisabeth told the Gestapo she was technically Polish, she thought it was a life-saving move. They were soon deported by boxcar but denied entry and returned to Germany. They avoided the fate of the 12,000 Polish-born German Jews who a month earlier were expelled in a single night under gunpoint. Poland allowed 4000 to enter but the remaining 8000 slept in stables and on the cold cobblestones of the street and train station at the border.  This was the desperate plight of the Jews- Germany didn’t want them but no country would take them.  Those expelled were now stranded, hungry, penniless, and panicked. 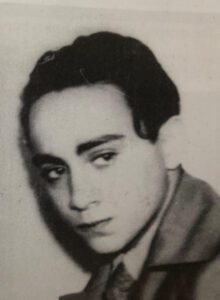 Herschel Grynszpan, the 17-year old whose parents were stuck at Zbasyn, and in revenge, shot Ernst Vom Rath in the German Embassy in Paris. This event was the excuse to unleash Kristallnacht.