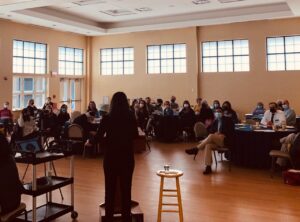 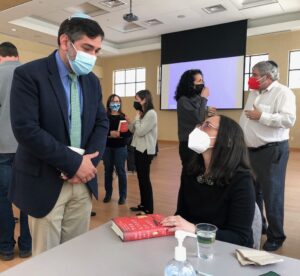 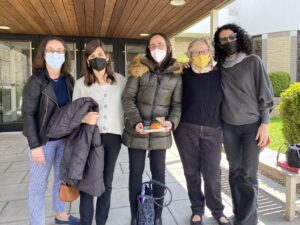 “Who does this?” our Yom HaShoah speaker, Judy Batalion, asked on Sunday morning, April 24, referring to the women who defied Hitler in hundreds of acts of unimaginable courage—as couriers disguised as non-Jews on nail-biting missions, as smugglers who hid weapons in their handbags and as ghetto fighters. Batalion, author of the acclaimed The Light of Days: The Untold Story of Women Resistance Fighters in Hitler’s Ghettos, answered that before the war, young Jewish women and men participated in socialist, Zionist, and religious youth movements throughout Poland; already connected, organized, and motivated, they were poised to act in the face of death and the destruction of their communities.

Why have we not heard these stories before? Well, for one thing, they were written in Yiddish and often not translated; for another, after the war, women (men too) who resisted and survived dedicated themselves to getting on with normal life; and further, the world of the 1950s and beyond was largely not ready to hear about Jews with guns for a variety of reasons. It has taken many decades for these stories of Jewish empowerment during the Holocaust and specifically the voices of women, to emerge.

WJC’s Holocaust Learning Center is dedicated to furthering conversation and new ideas to deepen and enhance our understanding of the Holocaust. We seek your input so we can continue to bring inspiring, cutting-edge programming to the WJC community. You don’t have to be a descendant of Holocaust survivors, just someone who believes that the subtleties and vicissitudes of Shoah history have meaning for us today and that we must continue to commemorate those who suffered and perished. If you would like to get involved, please contact Amy Fastenberg at amyfastenberg@gmail.com or Holly Rosen Fink at hrfink@gmail.com.

Last Sunday, following Batalion’s talk, an attendee told her mother’s story of survival; she will provide a copy to add to our own compendium of members’ Holocaust stories. Does someone in your family have a story connected to the Holocaust? Contact Ruth Obernbreit at Ruthie6851@gmail.com if you would like that experience to be included and preserved for the future.